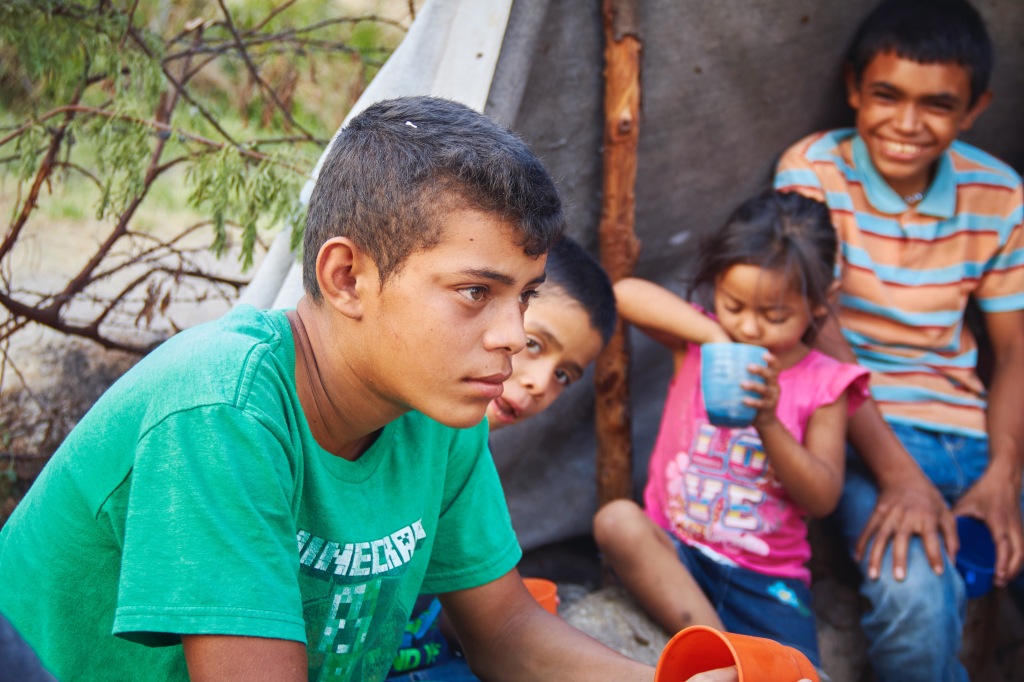 Their home is mangled and barely stands.

Their shoes are worn beyond repair–shoes most of us would throw away without hesitation.

There are days they skip meals even though it would cost only $4 to feed their whole family for the day.

Yet, this is not the greatest deficit for Candida and the children for which she cares.

Candida’s daughter, and the mother of these two young children, was murdered. There is now a stark void where a mother’s arms should be and increased struggle where another provider, their mother, would have been contributing to care for these growing, vibrant children–but she is gone.

It is through the grace of a loving grandmother that these two have a home at all. Candida took her grandchildren in when their mother was killed.

In addition to their grandmother, the children share this home, with their two uncles, Candida’s two sons, who are just a few years older than themselves.

They all share one room, a generous term for their residence. Likewise, their beds consist of only a single shared mattress for all five members of the family.

Aside from some occasional contributions from a father of one of the boys, Candida is the sole adult provider for these four beautiful children.

These two boys, Candida’s sons, are the men of the house. There is no husband, father or grandfather bringing home a daily wage or contributing to household duties. Marriage in Honduras is expensive. As a result, many couples do not get married. When the babies come and the strain of daily survival becomes more difficult, many of the men simply leave. These boys, like so many others in their area, will continue to grow up without the influence, love and support of a father–something every child, even the poorest, deserves.

It is only because of these boys’ help that there is a home at all. They, with their grandmother, built their home.

Their means are so limited that much of the home is made up of sheets and recycled material. Constructed much as American children might build a fort, the material is tucked into each little nook to maintain protection from the elements. What first world children would find to be a delightful fort, is the permanent living arrangements for Candida and her family.

A recent fire took away the kitchen galley they had been fortunate enough to have, leaving only an open sky under which to cook in all weather conditions–generally with the scorching sun bearing down on them as they stand in front of the fire.

Candida is able to sporadically find employment doing laundry. For a twelve hour day, from seven in the morning until seven at night, Candida will earn a maximum of 150 lempiras, or approximately $6.25. At $.50 an hour, when she is able to obtain work, it is not much to support herself and four children.

On the days Candida does not work, her boys sell firewood. Though they should be in school, education is not a luxury they can afford. The lack of education for these boys will likely perpetuate the debilitating cycle of poverty. On a good day of selling firewood, the boys will make a little more than $4. On other days, they return home after trying to sell firewood with nothing but the firewood with which they started the day.

There is no government help, or mandated child support. Neither are there any food stamps to assist with their needs. When the money runs out, so does the food. On good days, they are blessed with two meals a day, which generally consist of beans, rice, eggs and butter. On an especially good day, they are able to add chicken to their meal.

Candida lives without much, but she still has treasured possessions–the children, and health enough to allow her to grow a small garden despite the epilepsy with which she deals. It is from this small plot of land and her diligent efforts that the family receives their main, though very limited, supply of vegetables.

Her garden is a source of joy for Candida in the midst of the daily struggle to simply survive, and with it, she is able to feed her family just a little bit better. When asked what she would do if she had money to improve her life, her answer was both simple and modest. There were two things she identified. First, construction materials to fix their home. Second, she would like a latrine, something they currently live without.

Sometimes they must go without food, but in the days following our visit, they will have enough–for a short time–a far too short period of time.

In November of 2019 we were able to help Candida make improvements to her home to better shelter and protect her family.

Processing…
Thank you for joining us on this journey!
Whoops! There was an error and we couldn't process your subscription. Please reload the page and try again.